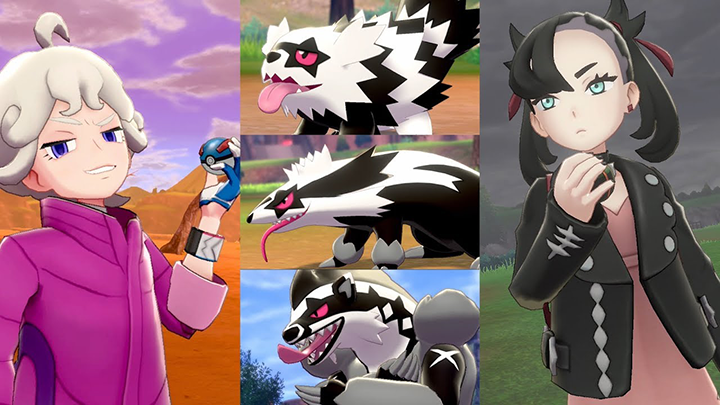 Pokemon Sword and Shield gets another trailer showcasing new things of old mechanics that are very familiar for Pokemon Fans.

One of the new Pokemon introduced in the Galar Region is Morpeko, this pokemon is an Electric/Dark type that is always hungry. Allowing Morpeko’s appetite to grow changes its electric timid self to a hungry dark type. This changes his moves from electric to dark and also draws out a more violent and aggressive behavior.

Just like Alolan forms, the Galar Region also has Pokemon that has adapted to its environment. Giving rise to Galarian Forms, with 3 pokemon announced to have them. First is Weezing, our old poison Pokemon from back in Gen 1, its Galarian form makes it gain the Fairy Type. Galarian Weezing has a protrusion that looks like a top hot but also acts like exhausts from power plants. These protrusions allow it to purify air, where it intakes poisonous gas and exhausts clean air on the top hats. By doing this, Weezing gets poison buildup that it can use in battle.

Giving Gen 3 some love, Linoone and Zigzagoon get their own Galarian forms. The two receive Dark-type Galarian forms, the oldest branch in their species. Getting more aggressive and looking for fights, these species of Pokemon are found almost anywhere in the Galar Region. In addition to this, Galar Linoone evolves into Obstagoon. This is due to the harsh environments in Galar, causing Linoone to increase their survival instincts, thus evolving to Obstagoon. Its main move is Obstruct, which makes it taunt their opponent by crossing their arms and absorb the incoming attack.

These pokemon are primarily used by the main antagonistic Team of the game — Team Yell. They are here for one thing only, support their idol Marnie. Even if it means causing trouble, and disrupting other trainers in their Gym Battles.

Marnie is one of your Rivals, being the unofficial leader of Team Yell, she aims to be the Pokemon Champion of the Galar Region for certain unknown purposes. Another one of your Rivals is Bede, who just like Marnie also aims to be the Champion for his own unknown purpose. However, he has an endorsement by the chairman of the Pokemon League, instead of a bunch of loud troublemakers.

Nearing its release, Pokemon Sword and Shield still has a lot in store for sure (starter evolutions please). This 8th generation of Pokemon comes to Nintendo Switch on November 15, 2019.

A new Borderlands is coming