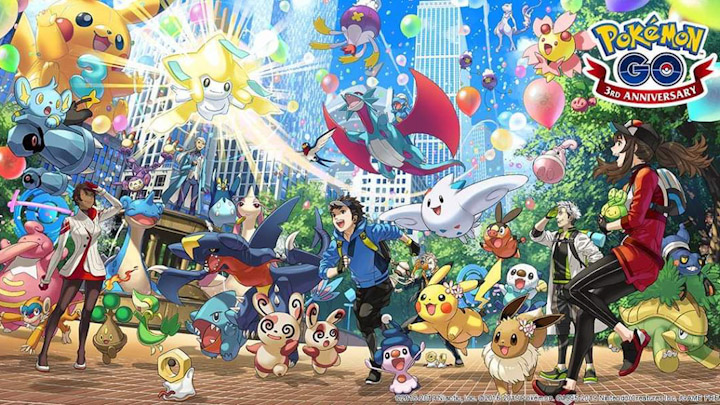 It has been 3 years since the release of Pokemon GO. Despite having missing features at launch, through updates, it has added what fans requested.

To kick off its 3rd year anniversary, Pokemon GO celebrates with a variety of events.

From June 28, 1PM PDT onwards, Shiny Alolan Pokemon will now have a chance of being encountered. New Avatar Items with the style of the 3 Team Leaders can will be available for purchase on the shop.

Party Hat Pikachu will randomly photobomb your GO Snapshots. Then you’ll also have a chance of hatching a Party Hat Pichu from eggs. These will be available during June 28 – July 6.

During June 28 – September 2, Special Research will be available for all Players level 10 and above. These research will provide special rewards that will allow newer players to catch up what they have missed on. Raid Bosses will also be easier to defeat, as well as having more Premier Balls to catch them. Trading Pokemon will have 1/4 less Stardust cost.

Finally, in the artwork Niantic has released for Pokemon GO, we can see the Gen 5 starters: Oshawott, Snivy, and Tepig. This signals the arrival of the Generation 5 Pokemon.

Pokemon GO seems to be gearing up to be the Pokemon game it was made to be. With the arrival of Gen 5, Pokemon GO yet again expands its database and moves closer to featuring all current mons, that’s before the release of Gen 8 though.

Valkyrie Anatomia -- The Origin Global out now on Android, iOS

Kid Goku bursts to Dragon Ball FighterZ on May 9th