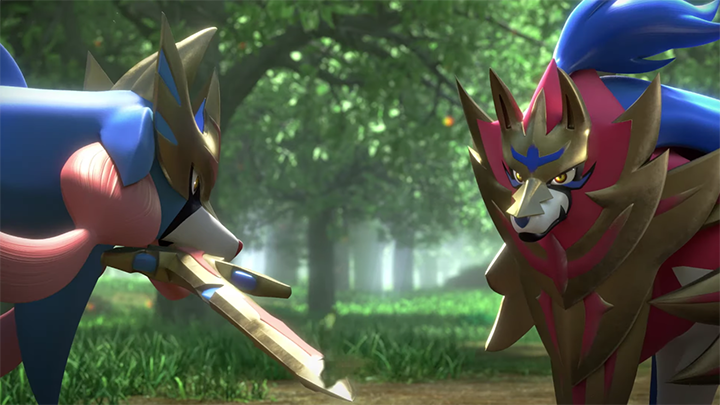 Pokemon just concluded its latest Direct and with it some more information on the new main series Pokemon titles. This includes new Pokemon, new world changes, and a new dynamic that will surely make every trainer drool from excitement.

First up are the new pokemon, aside from the 3 starters we already knew. A total of 7 new pokemon were revealed. One of them is Drednaw, a Rock/Water Tortoise-like pokemon that uses its strong jaws. Corvinight, a Flying/Steel Pokemon that is used by their trainers to produce a fast-travel mechanic called the Galar Taxis. Gossifeur and its evolution Eldegoss, Grass type pokemon that seem to specialize in healing moves. Wooloo a Normal-type sheep pokemon who is a common companionfor the people of Galar Region.

The last 2 pokemon revealed are the flagship legendaries of Sword and Shield/ The Sword wolf: Zacian, and the Shield wolf: Zamazenta

Aside from pokemon, we get our first look at the companions/friends we will have in our adventure in the Galar Region. First is the Pokemon Professor of Galar: Professor Magnolia, and her assistant/granddaughter, Sonia. they will both have a hand in giving you advice throughout your journey.

No pokemon game would be complete without your very own rival. Introducing Hop, your childhood friend and rival throughout the game. He aims to be the pokemon champion just like his elder brother.

Yup, you read that right, the Champion of this game is your rival’s brother and also Sonia’s childhood friend. Leon, the champion, is widely popular around Galar, and by his side seems to be a Charizard (does it mega-evolve?).

Speaking of the master trainers, one of the gym leaders was revealed — Milo, who is a Grass type gym leader. It seems the gyms in Galar region are stadiums, where spectators will get to witness your epic battles with the leaders. That’s not all, it seems that both you and the leaders can us the new mechanic: Dynamax.

Dynamax is where your Pokemon grows to a gigantic size, boosting its stats and causing your their moves to be boosted and have effects similar to the Z-Moves from the 7th Generation. Dynamaxed Pokemons have a massive power spike but only lasts for 3 turns.

As for the introduction of Dynamax, the Galar Region has Dyanamax Raid Battles, where you and other trainers get together and battle a Dynamxed wild Pokemon, with an opportunity to catch it once you have defeated it. However, instead of lasting 3 turns, the Dynamaxed pokemon will be dynamaxed for the entire duration of the battle.

This mechanic is very similar to the raid battles of Pokemon Go. The Dynamax raids include Pokemon that can’t be caught in the wild, so trainers will surely look out for these.

Dynamaxed Wild Pokemons can only be encountered in what is called as the Wild Areas, which are the wide areas all-around Galar Region. Here’s the catch, these areas are open, meaning this is the closest we have to an open world Pokemon game.

The mechanic from the Let’s Go series returns, as overworld wild pokemon roam in your view. In addition to this, once your character is in Wild Areas, you will have free control of the camera, just like in other open world games.

Pokemon Sword and Shield releases on November 15, 2019. It will also have a double pack, which includes both versions.

Collection of Mana released at E3 2019

No Man's Sky Beyond, the next free update