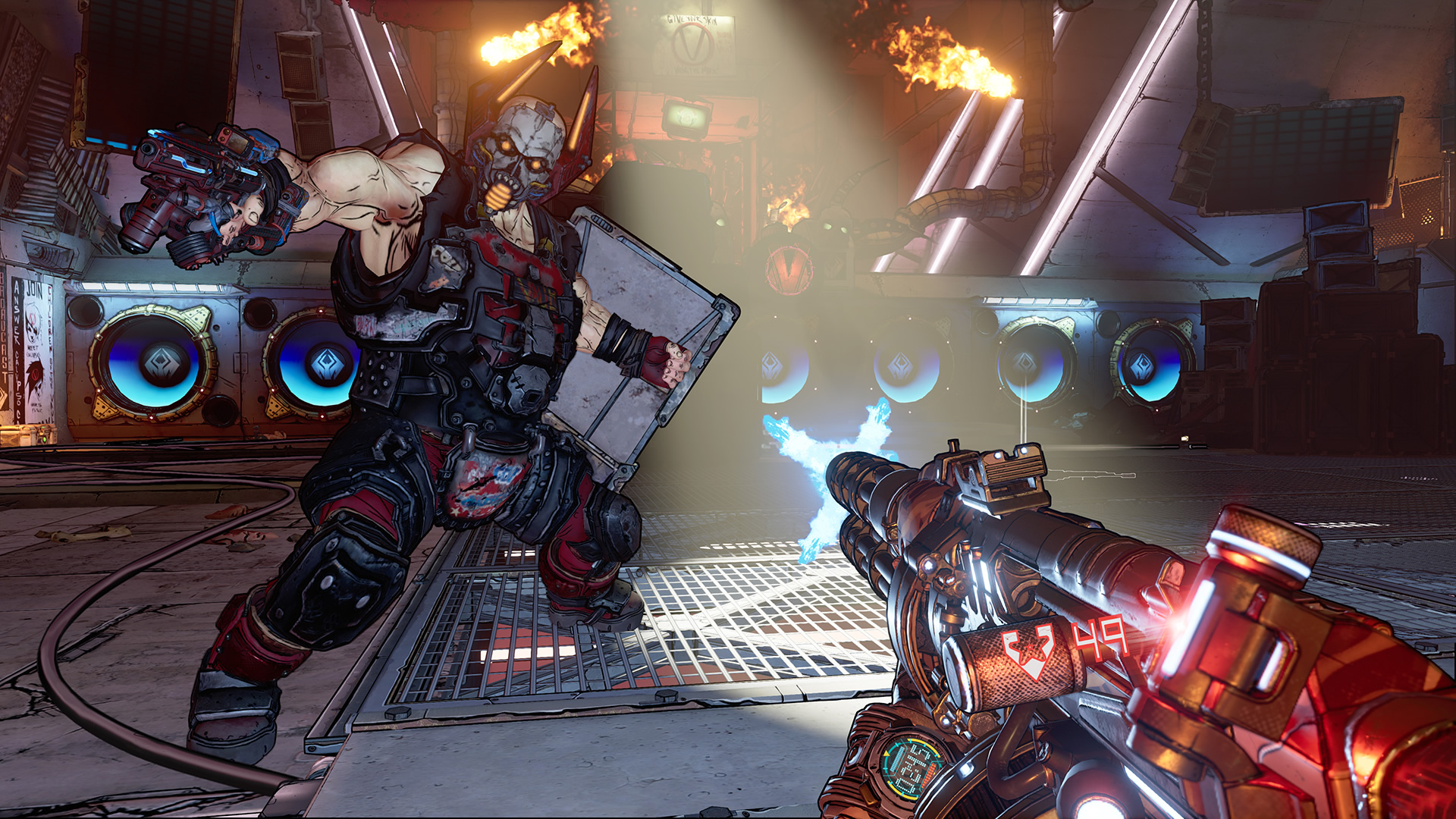 A whole lot was revealed during the short Borderlands 3 Gameplay preview!

Recently, Gearbox hosted the Borderlands 3 Gameplay reveal. Providing people with enough information to keep the hype. Gearbox gave us almost an hour of gameplay, let us look at what Borderlands 3 has to offer.

The gameplay starts with the beginning of the game, where you’ll meet the most familiar face: Claptrap (with a new voice actor). He will give you an Echo Device, something we have used in previous Borderlands game to display our health, map, etc. The new thing about this is that we actually get to see the 3D model of this in our Character’s hands, to connect to the Quick Change kiosks and Vending Machines.

You’ll notice from the get-go that the graphics of this game has significantly improved. It has more details and better lighting that makes it look like current gen games, while still keeping that one of a kind Borderlands art style.

Now the video moves on to the star of the show: guns and combat. The game starts with the player and Claptrap invading a recruitment center of the main enemies: Children of the Vault. First using a pistol, Gearbox has announced that all weapons will have alternate firing modes. Meaning each weapon can have different playstyles as well as different elements for each firing mode.

This will give way to a varied shooting system that encourages players to be creative and, most importantly, to have fun. There are also varied gun designs and added features. One gun has a shield out when aiming down sights, another is a sound gun that shoots sonic waves. The most interesting change is the Tediore guns.

Throughout the other games, Tediore is known for having an interesting reload mechanic, where you just throw the gun instead of reloading, and a new one generates in their hands. This mechanic has been improved in Borderlands 3. When reloading (throwing your gun) added effects will rise, so far 3 effects were revealed. One is a ball of lasers that will form around the thrown gun and bounce, causing havoc to the poor soul in its path.

Another will make rockets rise from the gun and home in on nearby enemies. Last but not least is the thrown gun will have legs, walk around and shoot anyone in its path. This effects are spammable, so reloading a lot will allow you to have an army of guns with legs.

Mixing the new mechanic of the reloading Tediore guns, the alternate fire modes on almost all guns, and the creative gun design/additional effects, Borderlands 3 can give rise to chaotic fun. With over one billion guns, we’re looking forward to what Gearbox has in store.

The shooting part of the reveal shows that the environment can now be used to your advantage in more ways than just shooting explosive barrels. The environment is now destructible, meaning covers can now be destroyed after being shot at for some time.

Explosive Barrels can now be pushed/thrown at an area by meleeing it, and of course, explode when you shoot at it. What’s more, is you can shoot pipelines to drop flammable oil that can burn from explosions. We’ve yet to see what Gearbox behind the curtains in terms of more environmental hazards.

It seems that there are a lot of additions to enjoy coop to the fullest. First is instanced looting, meaning players will now get the same loot, without the worry of competition. Another is level balancing, a player’s level will affect their enemies and the loot around them. Meaning if you’re level 25, you get level 25 loot and enemies, even when you go to earlier parts of the map.

This will only apply to you, upon playing coop, a level 25 player can see the same enemy as a level 5 player, but that enemy will be level 25 for the former and level 5 to the latter. This also applies to loot drops, so level 25s also get level 25 drops. This allows a more definitive coop experience, as hard carrying can be eliminated. As for those players that don’t prefer this system, classic mode is still available, which reverts to the old gameplay mechanic.

The story, on the other hand, revolves around the Calypso twins: Tyrene and Troy. They are the leaders of the Children of the Vault cult, whose main goal is finding Vaults (yes, plural); so Tyrene can use her Siren powers to obtain the powers of Vault Monsters.

Due to this, players will have to travel the galaxy to find other vaults, you know, being a vault hunter and all. For the first time, players will be able to leave the Pandoran system and travel to other planets (we did say galaxy right?). We also got to meet Sanctuary III, the player’s own spaceship that they can commandeer.

The Sanctuary III will be the central hub, it houses all the NPCs we know and love, and more. We’ll be able to get quests, pick our planet destination, and use the new machine, where we can claim lost loot. This new addition allows players to recover loot that they may have misplaced, eliminating the feel of regret not getting that gun we really needed.

There are also several quality of life changes. For instance, you can now reload your ammo from the vending machine just by clicking a button, no need to go into the vending machine interface. Another is that you will have access to 3 action skills instead of one. Of course, you can only equip one at a time, but being able to have more varied options is always a welcome addition.

For the streamers out there, Gearbox has added a twitch extension that allows viewers to see a streamer’s loadout, backpack, and skill trees in a simple UI. In addition to this, events can be started in this extension to allow giveaways of loot to lucky winners. Talk about support for the community, we’ll be sure to try this out.

To end the event, gearbox shows a new trailer showcasing the Borderlands 3 gameplay and locations in a very Borderlands manner.

What are your thoughts? Are you excited to play Borderlands 3 with all these awesome additions? Let us know in the comments section below!

Fist of The North Star Legends ReVIVE makes its debut