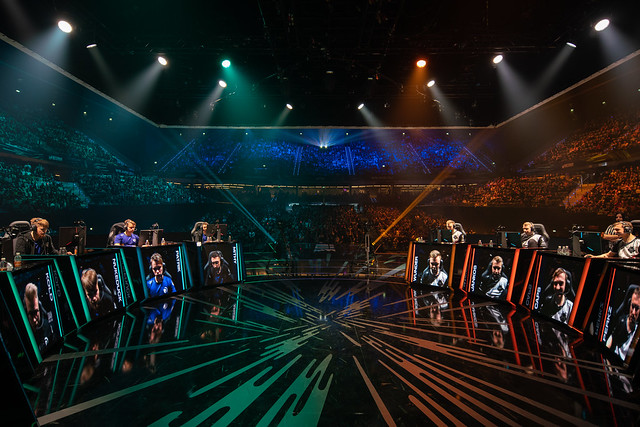 It was a week of convincing wins, reverse sweeps, and Silver Scrapes!

With most regions wrapping up their spring splits, last week was an event-filled week in LoL Esports. All of the major regions and a majority of the developing regions have just finished their finals. So, let’s look back at the week that was for LoL Esports.

The LCK Final saw two of the best teams in Korea, all split long, duke it out in what was a finals filled with surprises and unexpected events. Griffin surprised us all right from their game 1 draft, picking Taliyah and Pantheon for their bot lane, a strategy pioneered by BBQ Olivers in Korean Challenger. Despite their early lead, Griffin never managed to take full advantage of it as SKT’s scaling composition came online and eventually overpowered Griffin for the win.

As the series drew on, the nerves seemed to get to Griffin as they made one mistake after another while SKT continued their dominant form. Coming from a disastrous game 1 with their unorthodox strategy, Griffin opted for a standard, scaling composition in game 2.

However, it didn’t really make a difference as SKT eventually demolished them right from the one-minute mark. Game 3 featured the return of the Taliyah-Pantheon bot lane for Griffin, but it was all for naught as picture-perfect teamfighting from SKT and the finals MVP, Teddy, allowed SKT to win their 7th LCK championship and their 4th trip to the Mid-Season Invitational (MSI).

The final actually wasn’t the first time G2 and Origen have met in this playoffs; A week earlier, G2 demolished Origen 3-0, to claim a finals spot. Now, coming out of their loser’s bracket upset win over, reigning champions and worlds finalists, Fnatic, Origen looked poised to take the crown. However, despite their momentum from their win over Fnatic, Origen was shut down by G2.

G2 looked miles ahead of the rest of the LEC as they wiped the floor with Origen in the finals. In game 1, despite a back and forth early to mid-game, G2 managed to pull ahead to take the initial lead in the series. Game 2 saw G2 surprising league enthusiasts and analysts when they picked a funnel composition, with Jankos and Split MVP Caps picking support champions to give way for Perkz’ Taliyah.

Despite the wacky composition, G2 steamrolled Origen in 22 minutes to put themselves at match point. As if things couldn’t get any worse for Origen, G2 stunned them in Game 3 with a win in 18 minutes, the fastest in LEC history. With that, G2 claims their 5th LEC title and becomes Europe’s hope for MSI.

Over the years TSM and Team Liquid (TL) have cemented themselves as the LCS’ most dominant and most consistent organizations. In this year’s LCS spring finals, they meet each other in the championship for the first time. It was one of the most exciting LCS finals as TL managed to stave off TSM, 3-2, successfully pulling off the reverse sweep to win the LCS title.

The finals had no shortage of clutch plays and bizarre compositions as both teams were pushed to their limits. TSM came out swinging with wins in games 1 and 2, surprising TL who came fresh off of a 3-0 sweep over Fly Quest in the semi-finals. In particular, Bjergsen came up huge for TSM, earning pick after pick with Lux. With triple match point for TSM, TL had to step up to claim the trophy.

Game 3 became a pivotal point in the series as TL came from behind to take the win over TSM following some brilliant teamfighting. Their momentum continued into games 4 and 5 as TSM looked lost following the game 3 loss. All of TL came together in the last three games, with the team completing the reverse sweep to claim their 3rd consecutive LCS title and a spot at MSI.

Following what happened in the 2019 offseason with the region’s best players leaving for other leagues, the LMS seemed like it could be anyone’s game. A lot of people doubted the Flash Wolves (FW) especially due to the absence of their triple-threat core: Karsa, Maple, and SwordArt. In the finals, FW silenced all the naysayers with a quick 3-0 over the first seed from the regular season MAD. FW will now represent LMS at MSI for the 4th time in a row, but the first time without their main core.

It should be quite safe to say that going into the playoffs, this was the finals that nobody expected. While Invictus Gaming (IG) have dominated the league so far, the same can’t be said for JD Gaming (JDG). After they lost their star Clid to, now LCK Champions, SKT, the team looked mediocre in the summer split, barely securing 8th place to get into playoffs. However, JDG stunned team after team in the playoffs, including FPX, the 1st seed in the regular season.

In the end, sadly, it seemed that the magic had run out for JDG as they were rolled over by IG in the finals, 3-0. Despite coming out of a 3-2 win over the League’s number 1 seed in the regular season, JDG couldn’t do anything to stop IG from taking the crown. IG’s top and finals MVP, TheShy, stole the show, making play after play for his team. This finals win marks the first time IG has won an LPL championship, and with the LPL and worlds trophy, set their sights on MSI

That’s all the league action you needed to know about for the major regions. These and the 8 other squads from the developing regions will duke it out in the 2019 Mid-Season Invitational (MSI) in Vietnam and Taiwan. The play-in stage will start on May 1. For the latest league esports updates, check out LoL Esports.com.

Rust: The Struggle of a Never Ending Fight for Survival