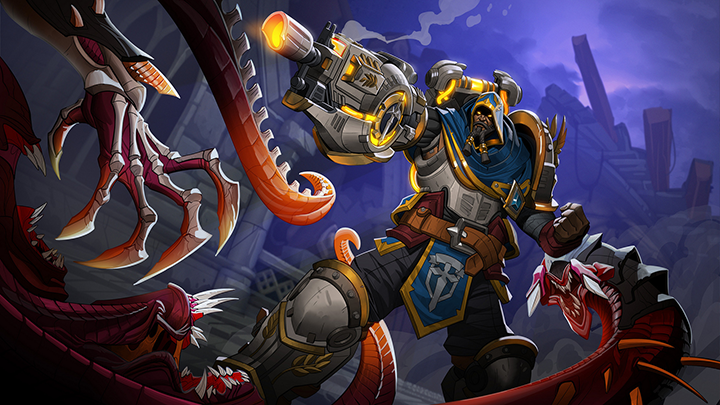 In Paladin’s Lore, an alternate future shows that the war between the Magistrate and the Paladins have caused dark creatures to envelop the land. This causes a post-apocalyptic world where most lifeforms have been eradicated by these creatures. The latest Champion, Atlas comes from this dark future. Upon learning Ancient Magic that would allow him to time travel, he has gone back in time to prevent the terrible fate the world will meet.

Atlas is the newest Frontline Champion that will enter the Realm in the Future’s End Update. Based of his lore, his entire kit revolves around using time, giving an incredible mix of both visual spectacles and complex gameplay mechanics that will surely make Atlas an interesting pick.

His Primary Fire is called Chrono-Cannon. Essentially it is a railgun that becomes more accurate as you charge it. Quick fires are automatic shots while charging it until 1.5s causes it to be more of a long-range concentrated shot that deal 900HP. To be faithful to his lore, when Atlas reloads he reverts time on his Gun-Hand, showing this animation where the bullets return to its barrel.

His alternate fire is called Setback, in which he shoots a ball of chronon energy. When this hits an enemy, it brings them back to where they were 4 seconds ago. On the other hand, his first ability Second Chance, allows Atlas to travel back in time to where he was and what state he was in 4 seconds ago. Second chance restores health to the highest point during the 4 seconds while in Setback, the enemy’s health will be brought to their lowest point. These 2 skills show how playing as Atlas is no easy feat as you have to be attentive of the 4 second time frame, but mastering this may give you a feeling of being a true master of time.

His second ability is his shield, like what all frontlines have in their kit. This one is called Stasis Field, where he puts a shield in front of him that nullifies all damage or projectiles that come through it. The thing here is that the people at Evil Mojo Games have dedicated their time to add a slow-motion animation of all the Champion’s skills. This provided an incredible aesthetic where all shots/projectiles can be seen moving slowly through the Stasis Field. Don’t worry, even if they slowly move to the other side you won’t get damaged.

Atlas’ Ultimate is Exile, where he makes 3 champions unable to move, use abilities, nor shoot, while also making them invulnerable for 4s. This can be a game changer as you can incapacitate 3 enemies during team fights.

Atlas proves to change the gameplay of being a frontline with complex gameplay. What do you think? Will Atlas change the meta? Is he balanced, Overpowered, or Underpowered?

ASUS, ROG rolls out Windows 11 update for their Laptops